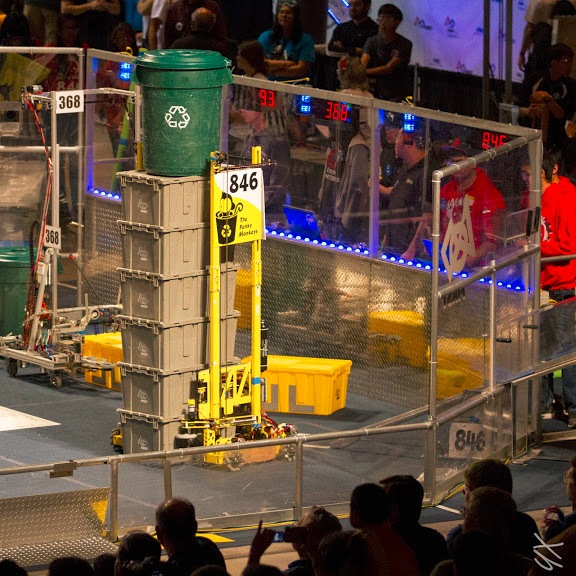 One of California’s best teams describes their robot Junky Monkey from the Recycle Rush season.

Lynbrook Robotics’ Recycle Rush robot, Junky Monkey, is comprised of five subsystem modules.  This modularization has allowed us to divide the robot design work between five student leads, who each led largely autonomous teams of designers.

To facilitate this design structure, we used the Subversion version control software to share files among student designers.  Students each had local access to robot CAD files stored on a central database, and could synchronize changes to sets of files with other students.  With access to the full and updated robot CAD model at all times, these students were even able to work on the robot model from home, streamlining the overall design process.

The sections that follow lay out each one of Junky Monkey’s five subsystems. Each segment details the factors that drove our design choices and the process of converting our concepts into working robot mechanisms. 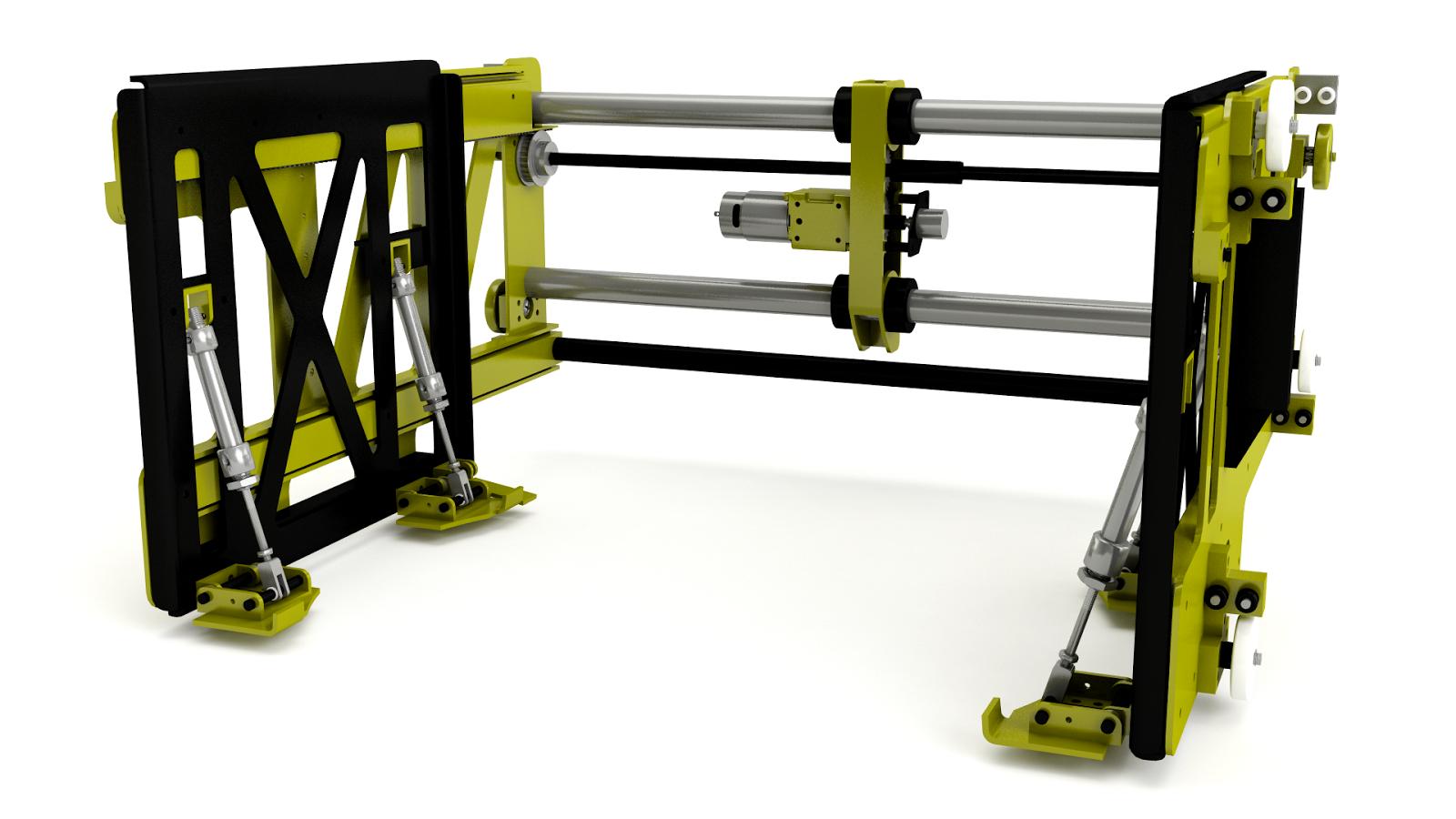 We designed our carriage as a single multi-purpose mechanism that is capable of grasping both totes and containers in either upright or sideways orientations.  Having a single mechanism both  reduces the complexity of our robot and helps us to increase the speed of our stacking cycles by allowing us to interact with the game pieces in a variety of ways. 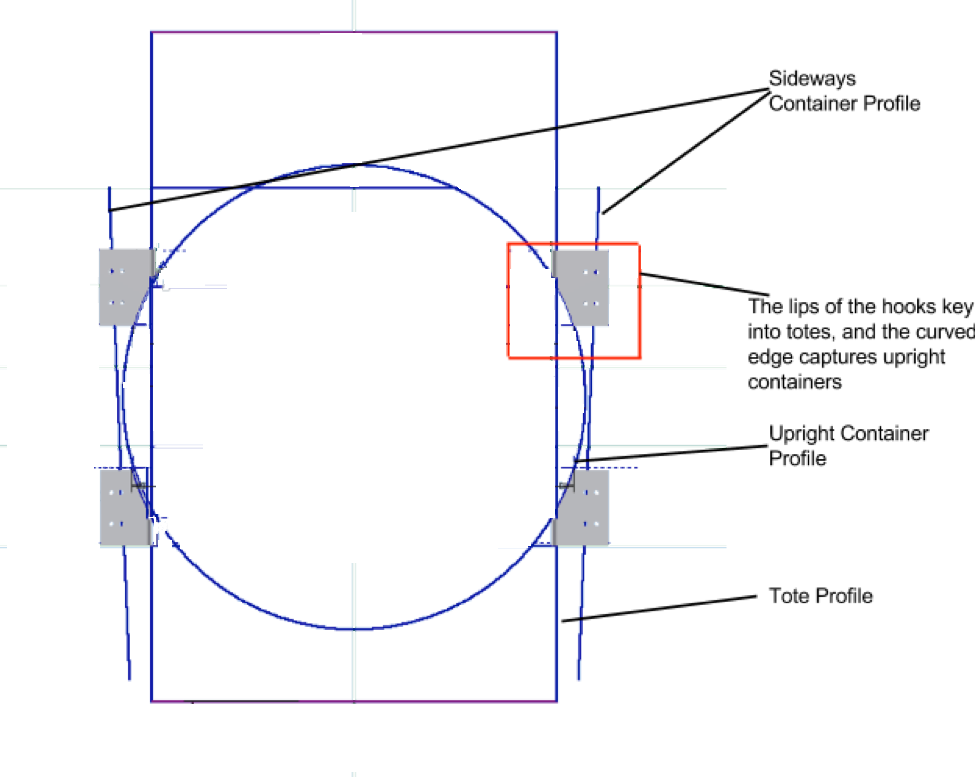 We overlaid profiles of the upright container, sideways container, and totes in Autodesk Inventor to determine the spacing and shape of our carriage’s hooks.

By carefully considering the profiles of each game piece in CAD software, we devised the spacing and the shape of our hooks to both capture totes and containers. The hooks not only grip a sideways container but also clasp an upright container snugly like a cup in a cup holder.

Our carriage used belt-driven drawer slides that extended at 1.5 ft/sec and allowed the robot to deploy a stack onto the scoring platform without driving over the scoring platform. This prevented the tall robot from tipping while attempting to score. We decided to use a motor driven system rather than a pneumatic system in order to control the acceleration and thereby maintain the stack’s stability while extending the stack. 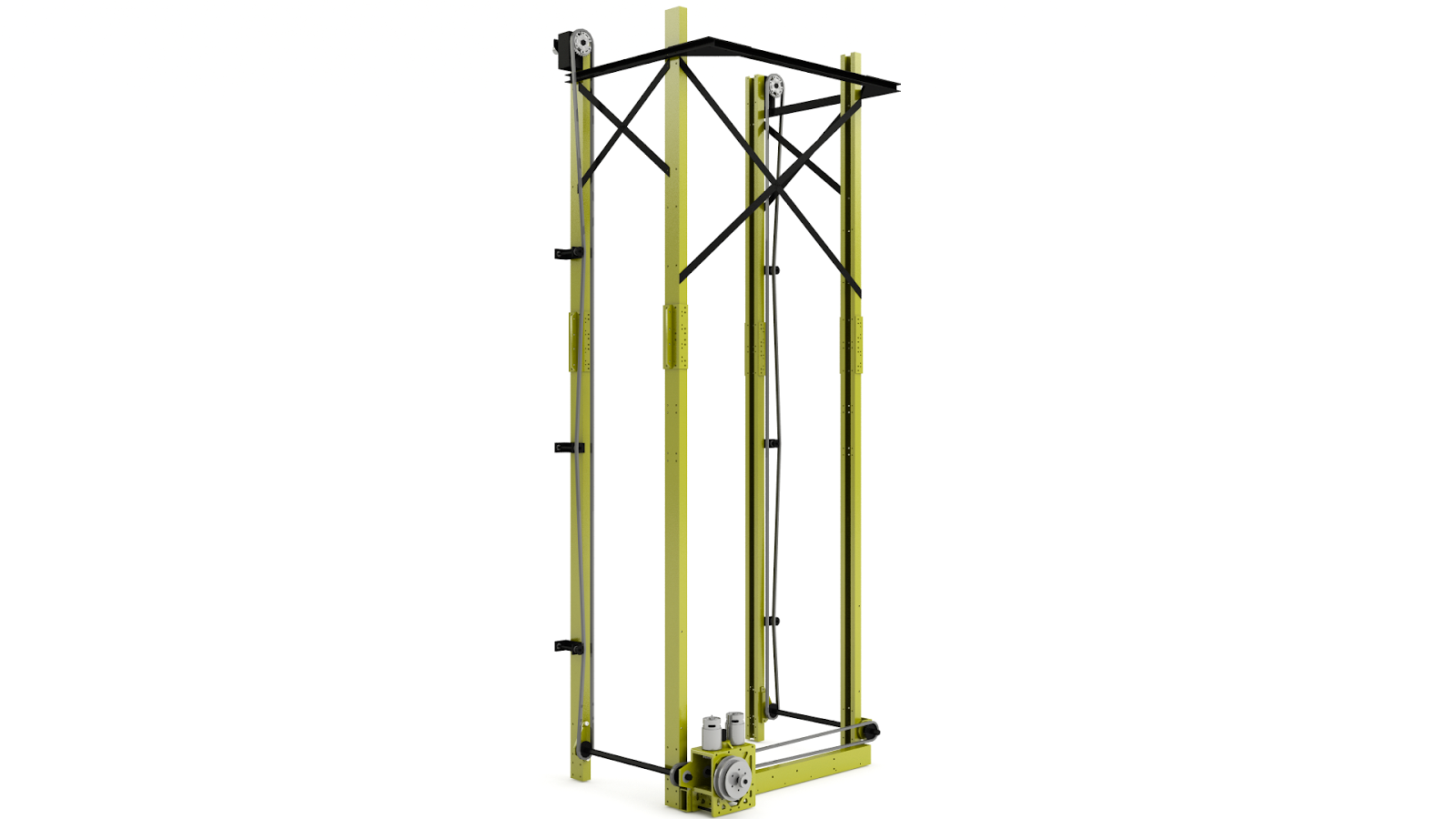 Our robot stacker is a counterbalanced elevator system with two chains driven by a custom dual-motor worm gearbox, which allows us to lift 6 totes and a container at 2 feet per second.

In designing the stacker, we decided on several requisites for the design.

We considered three mechanisms to drive the elevator, a lead screw drive, a belt drive, and a chain drive.  The lead screw was eliminated as an option since it would have to spin at a very high speed of approximately 17,000 RPM.  We decided on a chain drive because we had prior experience with chain drive mechanisms.

At the beginning of the design process, we set our target speed for the gearbox at 2 ft/sec.  However, we wanted to have the ability to switch gearing later on if we wanted to go faster or slower. We were able to do this by adding a spur gear set between the motor and worm shaft with the option to switch gears for different reductions.  We recognized that as long as the sum of the teeth on the gears remained the same, the center-to-center distance between the gears would also remain the same, which meant that keeping the locations of the motors and output shaft fixed, we could easily switch gears to obtain different reductions. 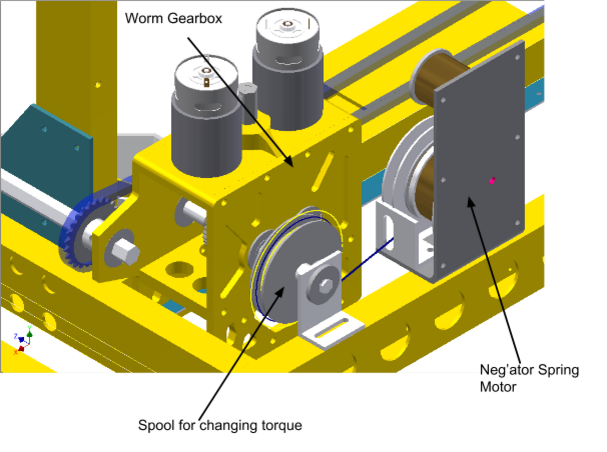 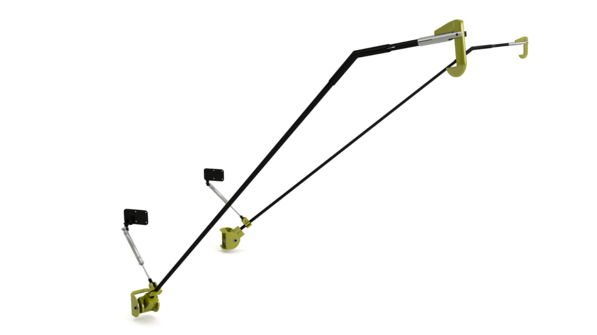 Towards the end of the build season, we became more convinced that acquiring the containers in the center of the field was vital to a winning strategy.

Since we were constrained to a total of three pounds maximum for both arms, we chose carbon fiber material for the length of the mechanism.  To bring the arms down from within travel configuration once the match started, we actuated the long carbon fiber beam using two small pneumatic cylinders.  We designed an arm with an aluminum inner tube that telescoped inside a carbon fiber outer tube. The telescoping arm allowed us to reach the center containers from the edge of the landfill while remaining within the maximum robot height limit when the arms were stowed away.  As the arm was actuated down by the pneumatic cylinders, the inner tube was simultaneously pulled out by a line attached to a pulley.

To snatch the containers quickly, we created a custom 3D printed hook that only folded in one direction.  As soon as the hook latched onto the hole in the center of the container, the robot drove back and pulled the containers from the step. 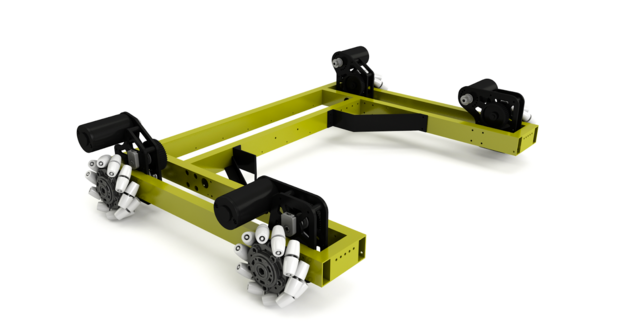 Our robot drivetrain provides for dependable stability, speed, and facilitated turning and strafing.  We chose the mecanum drive in order to be able to maneuver in tight quarters, and felt that the lack of defense during the game play provided us with the perfect opportunity to use mecanum wheels for the first time in the team’s history.

Our subsystem design leads decided to use a wide frame design as it provided space for collector rollers and tote/container intake in upright and sideways positions.

We also implemented the first student designed hybrid belt+gearbox in our team’s history. Last year, we innovated the drivetrain design with a drive gearbox that had its motors on the outside of the frame. This year, we furthered the concept by designing a gearbox with the motor on top of the wheel. We decided that the compact gearboxes would provide space for totes inside the wheelbase, which was required in order to lift the stack load and keep the center of mass inside the wheelbase as well.  We used a belt drive for the first stage of the gearbox to move the motor above the output drive wheel. 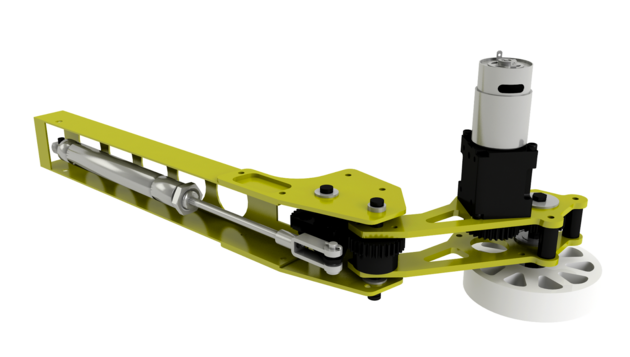 To reach totes on the field and bring them into the robot, we designed two collector arms with powered traction wheels.  However, we wanted these arms to also remain within the travel configuration between matches so that we would not have to remove and re-assemble them before every match.  We decided to sweep the arms back into the robot frame perimeter using pneumatic cylinders to manipulate the arms quickly into two positions. To retract the arms within travel configuration and extend them to the location of the totes during the intake cycle, we calculated that the collector arm would have to travel approximately 160 degrees.  From force analysis on the cylinder, however, we determined that the cylinder acted most optimally over a stroke less than or equal to 120 degrees, because in this range, the linear distance covered by the cylinder would effect a larger change in angle.  To convert the 160 degree sweep of the collector arm to such an acceptable stroke angle for the cylinder, we used a gear augmentation of 4:3. 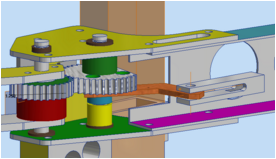 A close-up view of the gear drive mechanism that pivots the collector arms forwards and backwards.  The cylinder clevis couples to an arm that is attached to the 40-tooth gear.  The 40 tooth gear drives the 30-tooth gear, unfolding the attached collector arms over a 160 degree sweep.

In Autodesk Inventor, we used our desired initial and final positions of the collector wheels on the robot to plan the compact arrangement of the collector’s different components.  We also used Autodesk Inventor’s interference analysis and motion constraint tools to locate material overlaps and make sure that the design would remain compact while still functional.

After our first regional competition in Orlando, we wanted to improve the collector to center the totes and containers more precisely.

Through experimentation and mathematical analysis, we found that the largest source of inefficiency and weak intake was a tractive counter-force that served to splay the collector.  During operation, this reduced the collector wheels’ pinch force on the game pieces, often preventing them from being sucked into the robot.

In the first iteration of the  collector design, we assumed that wheels with higher tractions would be preferable, as they would have more traction on the game pieces.  Our calculations showed that wheels with higher μ-values instead caused the reactive torque to be greater, which detracted from the collector’s operation.  We tested several wheel models with varying coefficients of friction, ultimately selecting gray rubber-tread wheels over Sure-Grip wheels as the optimal choice for our design.

Junky Monkey’s modular design allowed student leaders and subsystem teams to take complete charge of the mechanical design process.  Committing over 1500 changes to the robot CAD model in our Subversion repository, over twenty-four students were able to contribute to the design of at least one of the five subsystems.  This autonomy brought up responsible and competent students whose efforts in creating a highly competitive robot contributed to our team’s success this past season.

In regional competitions, the robot not only made consistent stacks of six totes and a container, but its distinctive design features and efficiency on the field also impressed many.  At the Silicon Valley Regional, we had five judges come into our pit, plying us with questions about how we designed our robot, and several followed us into the match queues to see our robot in action. After a long season of designing, building, and modifying, we are proud of Junky Monkey, and hope to improve it even further this summer for our offseason competitions in the fall.