We are half way through build season. Half Way!

Right about time to start manufacturing parts and continue testing the new V1 robot and improving on what we have. We are a little behind in our schedule as we wanted to have testing done by the end of this week, but it will go into next week most likely.

Mostly building was done this week. All of the subsystems got new versions and are now operational.

The AwtyBox V1 (our custom gearboxes) were finished and we have the option of switching the internal gears to have 2 of the 3 speeds: 6 ft/s, 14 ft/s and 21 ft/s. The gearbox plates were CADded and made by our sponsor Lincoln Electric on their plasma cutter. The gearboxes were assembled and chained to the drive. The only thing that is not done is the plumbing for the pneumatics. 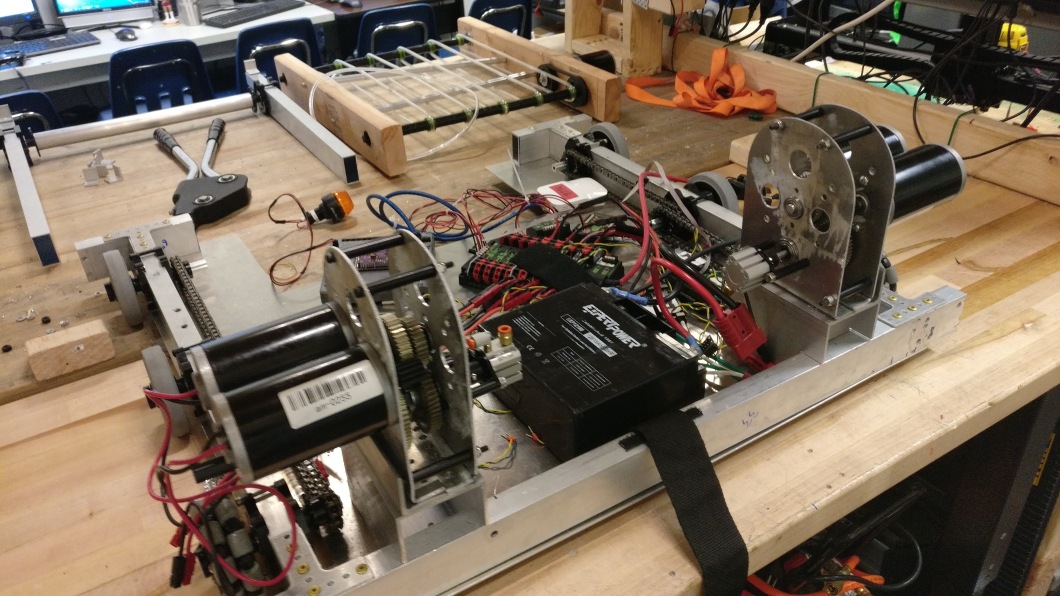 Our gearboxes were designed in CAD and the parts bought from WCP and VEX Robotics. The design is located here:

Currently, we are cutting the gearboxes on our X-Carve CNC. The new upgrades to it really made a difference in the quality of holes especially the bearing holes which used to be a little oval and are now an extremely good fit to the bearings. Here are some that were already done today: 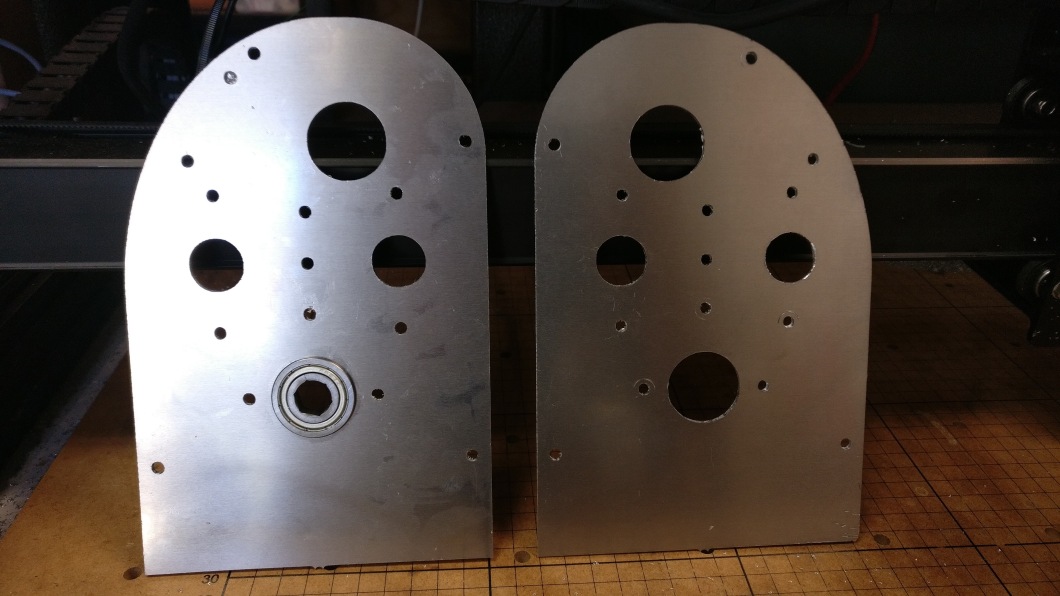 The shooter subsystem got most of the work as we wanted to make sure we can test a consistent shot with this V1 version. WE made it out of metal now and used 1/16 inch thick 2×1 as a base. We stuck with the Colson wheels as we liked the performance we got on our prototype shooter. Most everything else was changed, though. 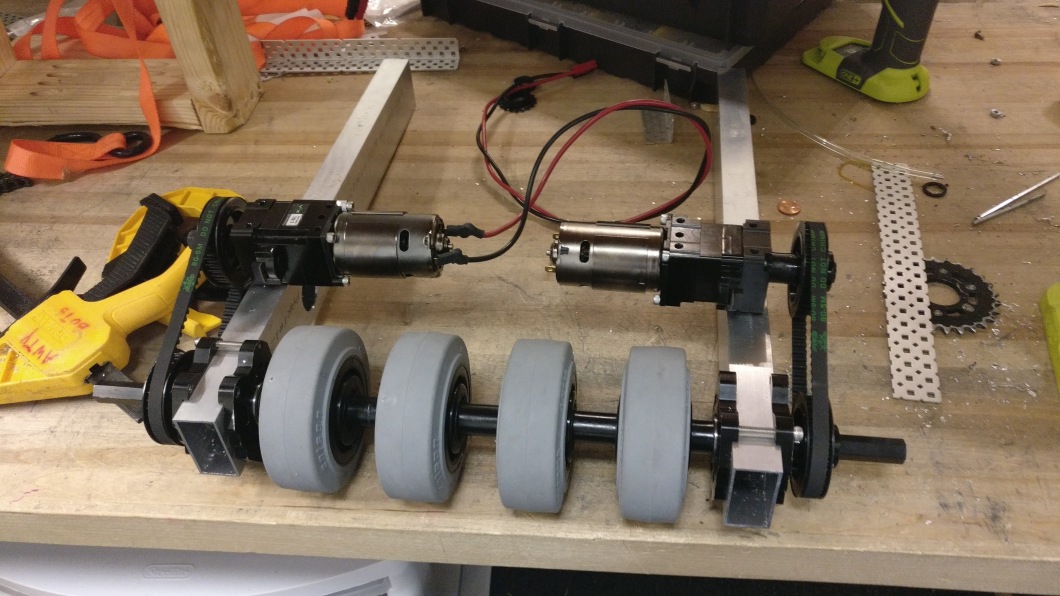 From testing so far (a lot more of it tomorrow) it is a lot quieter than chain and seems a lot smoother. We will test what the reaction to shooting the ball is tomorrow.

The shooter intake is the set of polycord rollers on the back of the robot that bring the ball to the shooter. Currently, they are set up to take 2 balls side by side and the shooter can shoot 2 balls at a time (we will see how well that works). These pulleys we printed on our 3D printer and they are just 1-inch pulleys with a 1/2 inch hex internal for the shaft. All of the polycord is loose though so we will have to tighten it before we truly test this system. 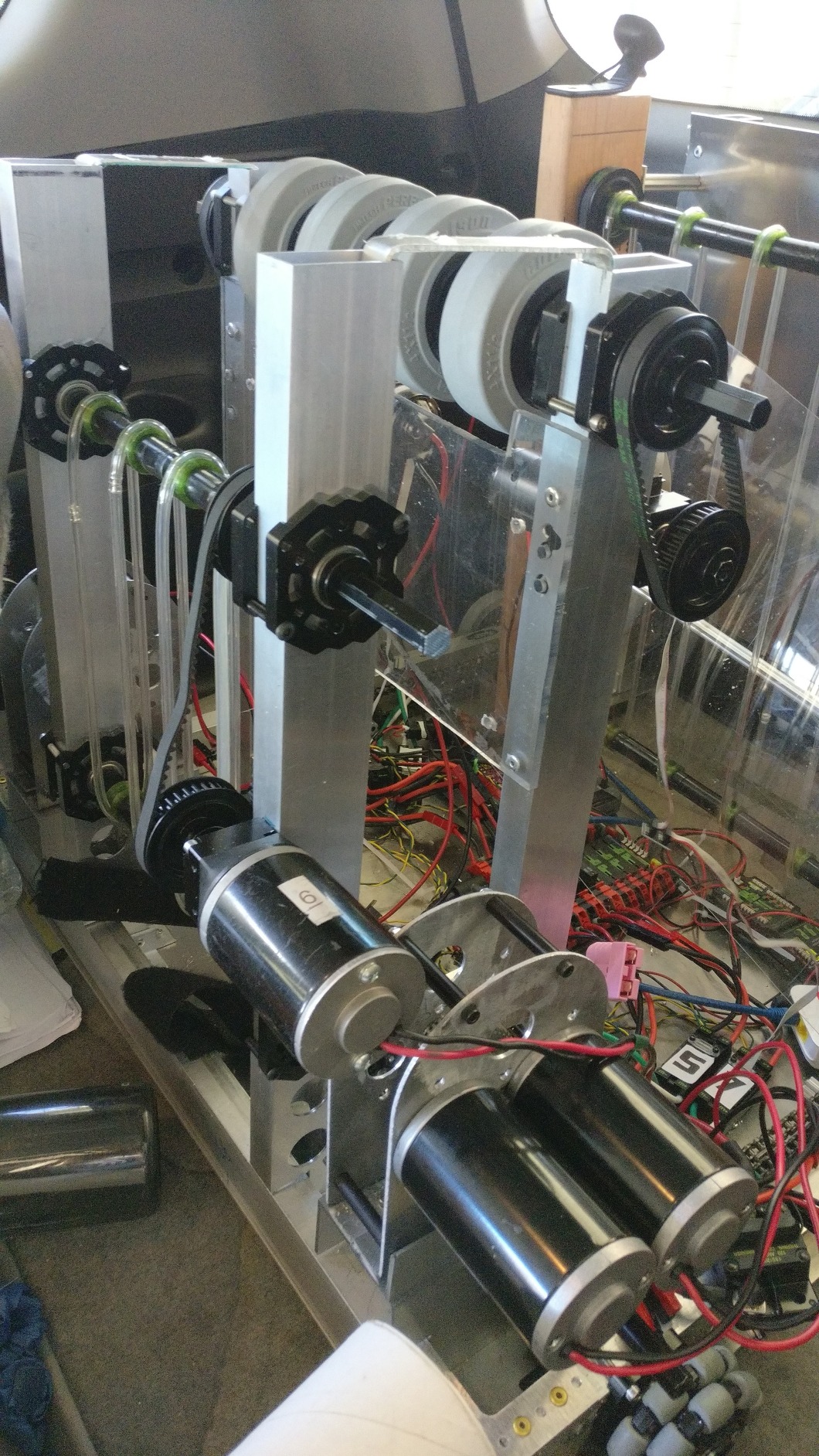 The one thing that was not done on the shooter was the hood or plate above the shooter intake that will give the ball backing when we are shooting. This will be added tomorrow when we are practicing at our friend Pearland Robotic’s place.

The intake was finished this week as well with the backing made out of 2×1 metal pieces as well as a sheet of aluminum for the backing. We did this to see if the metal compression (or the fact that it does not give) will help with collecting the balls and not letting them get stuck. We are also thinking of putting grip tape on the backing to make it harder for the balls to slip. 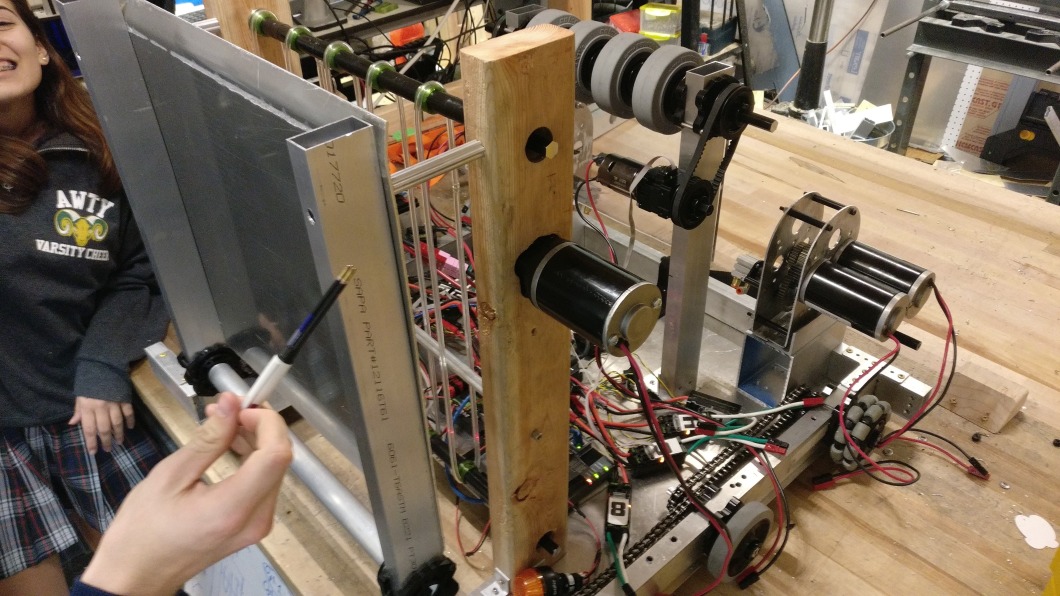 A roller on the front where the backplate is was added to help the balls into the intake. This roller will also be able to get balls that are stuck next to a wall in case we need to get them off the wall.

The polycord right now is about 2-3 inches apart on the intake and that is too sporadic so once some more pulleys are printed we will add more polycord to the intake.

The CAD team was able to work a little on the intake and shooter and got them somewhat changed to allow for more room inside of the “Fuel Tank”. We have not integrated the passive gear intake yet but that will also be the next step. 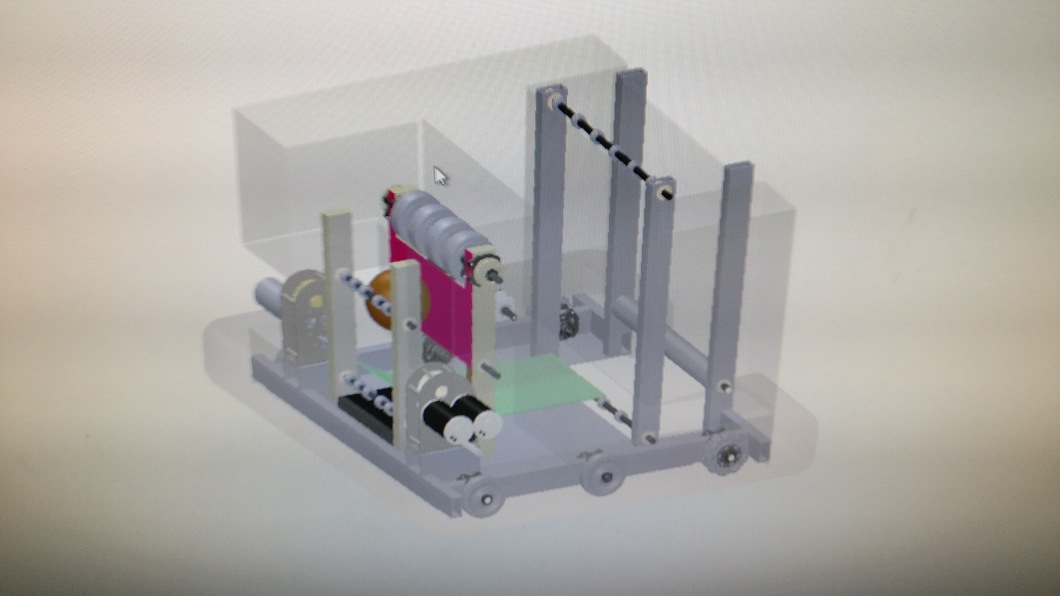 The CAD team has a lot of work to do now that the V1 of the robot is pretty much done. There are several things to fix with the shooter and the intake in CAD. After the CAD team is done in the next couple of days, we will be able to start building our practice robot and/or the final version.

Now that the robot is at a state where it is driveable, and can intake and shoot balls, we are going to go to Pearadox FRC 5414  in Pearland, to drive around and test the subsystems on a real field. This will give us a lot of good insight on what to change and what needs to get better/more consistent.