We are excited to introduce a new team to the Build Season Blog Series. While the weekly Build Blog by Spectrum Team 3847 provides an inside look at how a veteran team tackles build season, Awtybots Team 5829 gives a peek at how a newer team can also have a methodical approach to build season. Enjoy!

Awty Robotics Team or Awtybots 5829 is an FRC team out of Houston, TX. Started in the summer of 2015, last year was our first season in FRC. We are a private school working out of a classroom-sized space (yes it is small for FRC, but it takes organization). Follow us and our blog at Blog, Facebook, Twitter.

As with any FRC game, rules are extremely important to building a successful robot. As with any other sport the rules and judges (Inspectors, Referees, and Judges) are there to enforce the rules and this is why the first thing every team from rookie to veteran should do is to sit down and read the 100-page document that describes this year’s rules.

That is exactly what we did all day after kickoff. We went through and discussed all of the important game rules, robot rules, and human player rules.

Here are some really important rules/things we think you should know by heart: 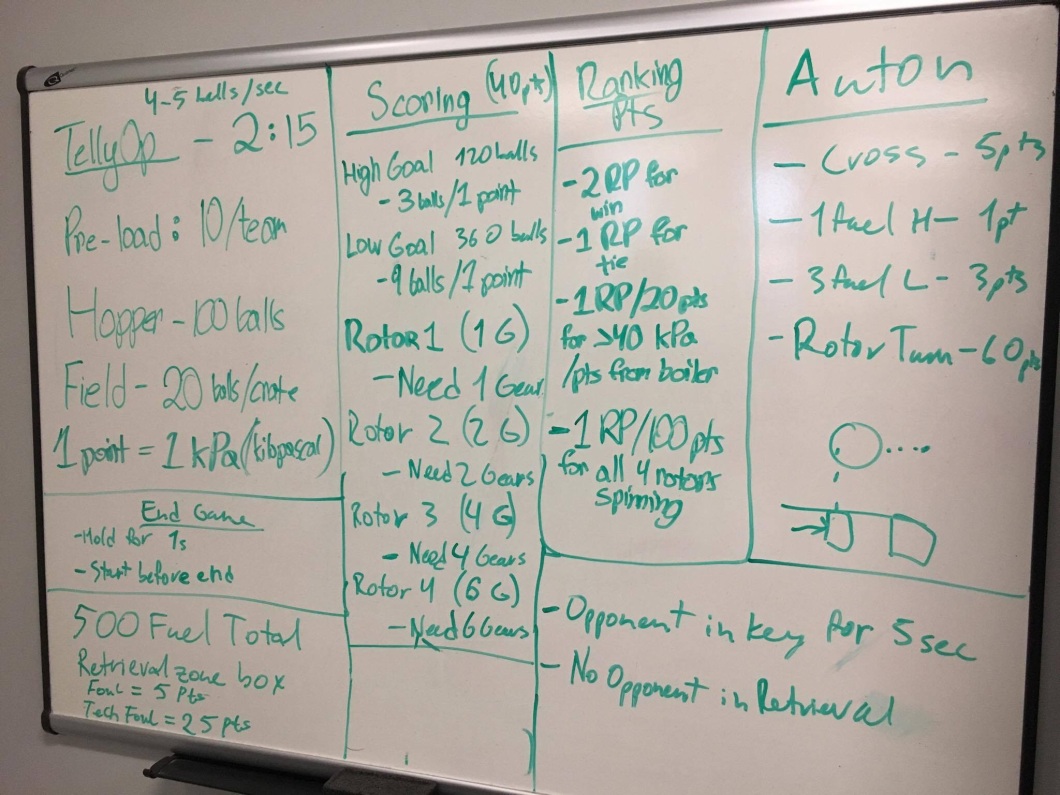 The next thing is to divide the game into tasks and here are the tasks (in order of importance initially) that we put together:

We put what we need and want next to each category. Note serviceability of the drivetrain. I think that that is one extremely important aspect as if a drivetrain breaks it usually takes a really long time and very difficult to fix. We are trying to change that.

Day 1 or kickoff day does not include any robot design talk, and we only meet Monday through Saturday, so robot design and prototypes start Monday. Our drivetrain takes the least time to get “finalized” or at least to get a good idea of what we want to do for it.

Having built a test bed on a west coast drivetrain last year and not fully taken it apart (well the frame was at least together) we decided that even though it was the wrong dimensions it would serve well as the first test bed for our drivetrain.

Because it is a flat field this drivetrain is low to the ground and relatively easy to manufacture and maintain if you use the versablocks. http://www.vexrobotics.com/bearingblocks-g.html

And the good thing is they can be used for any shaft application (with a 2×1) not just drive train. They are a life saver if you don’t have a mill or a CNC that will make exact holes for bearings.

The electrical system was done during the first day. Electrical is always the most complicated for new teams I feel like so we made an effort last year to do a lot of homework about electronics wiring and here are some things that we found:

As you saw above there are many tasks in this game so each deserves its own prototype. The first week is all about prototypes.

The first prototypes are always extremely crude as you can see in the picture below. I don’t think this shooter even has bearings. But it’s a proof of concept — it’s not meant to be pretty or work as you want the final one to.

After this prototype showed promise we start building the V2 of the prototype that will actually be a lot closer to what we want to use in the game (this one certainly has bearings on the shaft):

For this test, we used 4” Colson wheels powered by 1 775pro motor 1:1 but running at 50%. We have not measured the actual speed of the wheel but that is the next thing to do to make sure we can get a consistent shot and to see the dip in speed as the ball passes through the shooter.

254 and 1114 are great teams for spreading information and as a starting point we used this shooter here:

The intake prototype was very simple. We took some wood and put 2 shafts through it. Attached polycord between the 2 and put a backing of Lexan (not the best material for gripping the balls… Through some testing, we were able to find that we can feed 4 balls wide with a mini CIM with a 1:1 ratio and the intake worked well and could handle the load of multiple balls with ease and was extremely fast.

This fast intake will allow us to collect any balls that go in front of us when we are driving. We are trying to make sure everything in the entire system (the robot) works together so that the shooter doesn’t have to wait for the balls and conversely that the intake doesn’t overflow waiting for the shooter to shoot.

Hanging gives you a lot of points at the end, so it is certainly worth looking at. Our prototype for hanging is extremely primitive at the end of the first week but it does the job. We used a bag motor with a 150:1 versaplanetary reduction and then another 3:1 reduction (completely unnecessary) and during the test this system that we hung from the ceiling using paracord was able to pick me up. 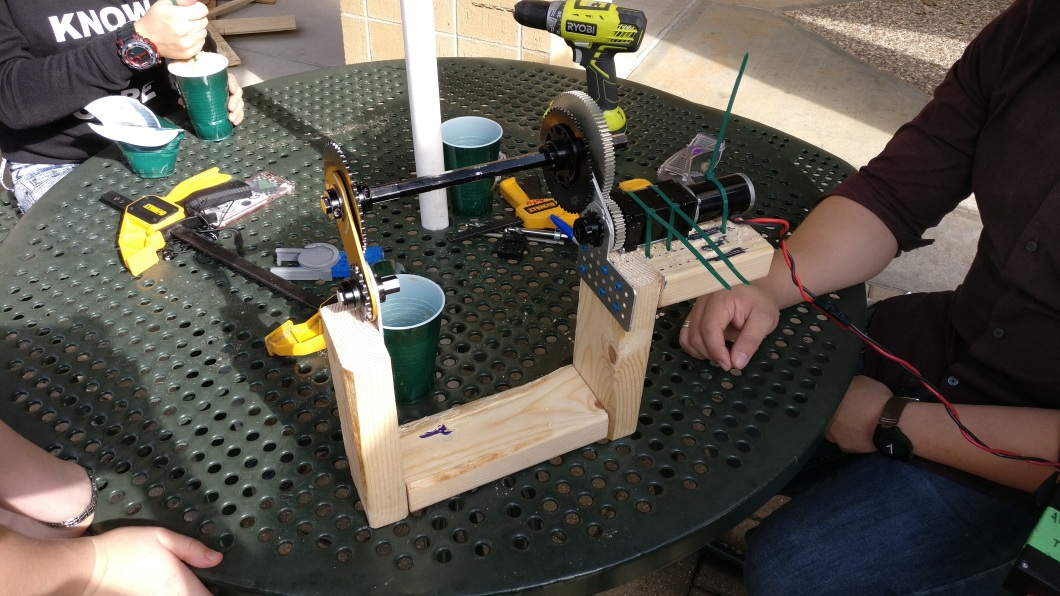 There is still a lot more testing to be done on this mechanism but so far the results are promising. The main goal is to make it fast yet able to pick up the robot reliably.

For the gear manipulator, we decided to go with a passive one as there are a lot of moving parts on the robot already. (this may change… like well…. Anything else) For this, we thought a receptacle for the gear on the front of our robot would work well and we could angle it from inside the frame toward the Loading Station so that it would be easier to catch it. Also, it is basically a large funnel which helps with making sure we don’t have to align exactly to get it from the station.

The programming team is hard at work as well. (We use Java to program as the students learn Java at school) The programming team has installed all of the new software but had several issues (all of them we were able to fix by reading the 2017 control system documentation: https://wpilib.screenstepslive.com/s/4485

1 of them is worth mentioning here:

CAD is the most useful tool available for free to any FRC team. It can help with building anything and visualizing something that you are unable to build in real life.

Our cadders have been practicing modeling the prototype drivetrain and shooter so that when it comes time to make the final robot they are extremely proficient. We also decided that we are going to make our own shifting drive gearboxes this year. The reason is that we want to make ours more compact and be able to get the speed ratio that we envision for our robot. This is the first year we are going to create our own. Last year we used the gearboxes from 1114 Evolution: http://www.simbotics.org/resources/cad 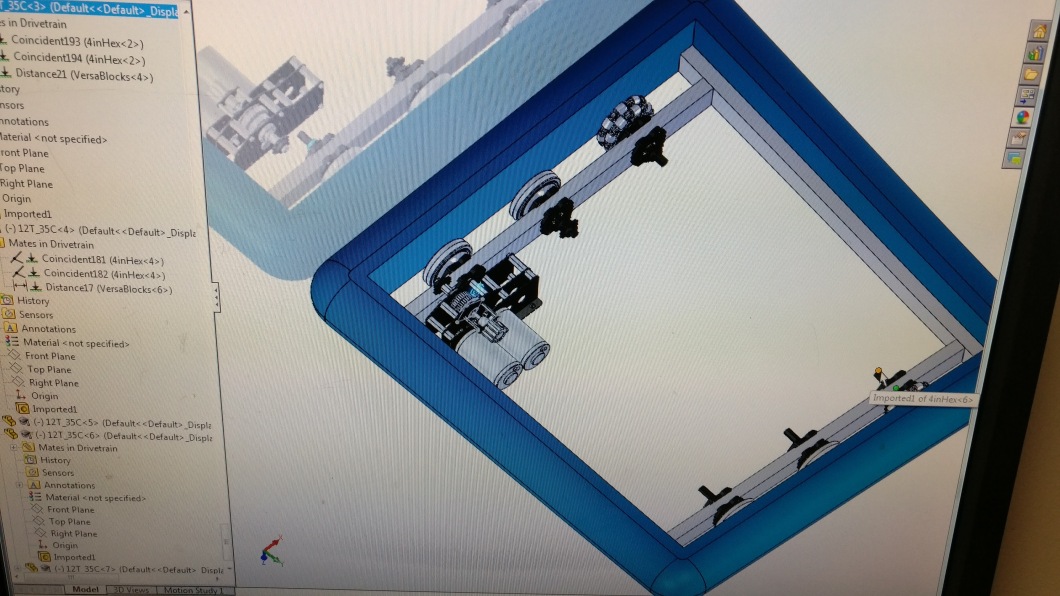 Sorry for such a long post, and I hope you find it useful! I promise week 2 post will be shorter!