Here is the current form of the prototype, we should be able to have it shooting balls tomorrow or Friday. This wooden version of our robot is named “Radio”

All of our CAD Files are published on our 2017 Robot Page of our website. 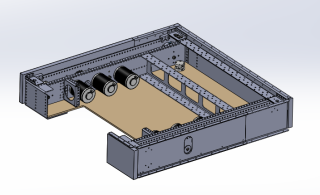 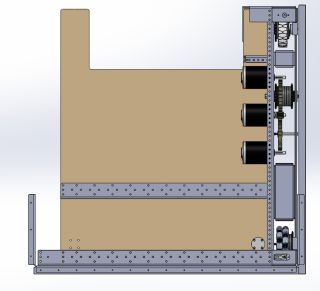 The plan for the drive train is a relatively simple single speed drive train with 6 MiniCIMs or a possible 1 CIM and 2 MiniCIMs on each side of the drive train. We are geared 12:72 which was the same gearing we used in 2014. We’ll have a little less acceleration than we did that year if we keep it at 6 MiniCIMs but should be fine for our top speed. You can see we have already started designing the bumper brackets for the robot this year as well. We are planning to use Slide Snap Latches similar to team Neutrino FRC#3928.

The drive train is going to be 4 wheel drive with 2 VEXpro traction wheels and 2 omni-wheels.

We are working on a couple additions to this current concept including possibly adding pancake cylinders to the base of our drive train to help prevent us from being moved from in front of the boiler when we are shooting Fuel.

Below you can see the wooden version of the drive train we made on our router to make sure our chain clearances, spacing, etc are all the way we want them.

Our 2nd subsystem is our shooter. Our plan here is to be a 3 wide shooter that shoots from inside of the key. We are using 2 small drums to shoot the balls. Initial testing proved that we could get these drums up to speed quickly and power them with very little reduction from a 775pro. We are actually going to be driving these ~1.5in rollers using GT2 belts with a 1:2 reduction off the 775pro motors. This system will be tested more this coming weekend. We are waiting for the GT2 belts to come in from WCProducts. Our test version was only a single ball wide and was powered by 4 775pros that were all in VersaPlanetary gearboxes and chain to the rollers.

The elevator is a crucial part of any robot this year. We are trying to optimize it so that we can eliminate jams and also get a large number of balls to the shooter very quickly. The 3 channel timing belt elevator should allow us to organize the balls easily. Speed is going to be our biggest challenge. We are working on making sure that the balls are centered in their paths and that they exit the elevator into the shooter in a consistent manner each time.

There are several planned improvements to this system including servo powered stops that will hold back the left or right sides of the shooter so that if we are shooting and know that are left or right shots won’t make it we can shut off one of them and only fire the balls we think can make it into the goal. We’ll also have a few sensors that will let us know that our balls are in the proper position to begin firing.

The main intake will be made from timing belts and WCProduct compliant wheels. Its job is to pull in balls throughout the match so we are ready to fire into the Boiler when the time comes. We are still working out pulley spacing, conveyor compression, etc. The design goal is that the balls come up the bottom of the hopper so that they push the balls above it up and out of the way. These balls appear to slide very nicely with each other so that should work well. The belts at the back of the conveyor are the first step in organizing the balls for the elevator. Balls held above the first layer will be able to fall in one of three tracks when entering the elevator. This may mean that our left and right channels have access to a few more balls then the center channel. We also plan to work out a way to agitate our ball hopper area to move balls on top of the first layer so they will rest into one of the three channels.

To make sure we can collect enough balls off of the floor we are using a mecanum over the bumper intake. 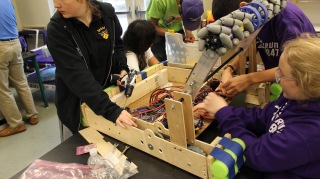 This should allow us to have a full 29″ of intake width on the front of the robot. This is very similar to intakes from last year that used mecanum wheels to collect the boulder.

Our gear subsystem is designed to collect gears off the floor. At first, we weren’t sure what the advantages of a gear floor intake system were but we soon realized that there are many advantages over just a human feeder system. Imagine if in Ultimate Ascent teams could only hold one disc at a time. If that were the case it becomes far more important to be able to pick and score any discs that were available near your scoring area so that you don’t have to drive the length of the field. There are a variety of reasons why gears may end up on the floor near your airship. Your teammates may drop them (possibly on purpose during auto) and possibly when they attempt to score them but something goes wrong. Picking up and scoring any dropped gears will make getting to 6 and possibly 12 gears scored much faster than having to run gear cycles each time.

The current gear system is planned to have a top roller and wedges on the side that roll the gear in and then a motor will raise it up and allow us to place it on the lift. Here is a quick video of the prototype gear intake.

The rope climb system is critical to almost every robot this year. It’s the fast way to score the most points and initial tests by a variety of teams have shown that it’s a pretty achievable task. Our current plan is to have a small diameter winch drum near the top of our robot in front of our shooter. This drum will either be powered by our drive train motors (1 or both sides) or it will be powered by its own motors. Since velcro is legal we will be using velcro with a slip knot tied in the rope to allow the winch to get a hold of the rope before actually winching up the robot. We will also mount several larger diameter plates to the which drum so that it can engage the touch plate.

“When you learn, teach, when you get, give.” ― Maya Angelou